Posted by Margari Hill 6317AP on

Join us for our special Ramadan MuslimARC Members event Saturday, May 1st, 2021 at 3pm EST.

In order to understand the roots of 21st century anti-Muslim policies in the United States, which date back to 19th-century anti-Asian racist policies and laws such as the Chinese Exclusion Acts, the internment of Japanese Americans, and imperialistic wars in Southeast Asia. The current spike in anti-Asian hate crimes comes from longstanding xenophobic tropes that portray Asian Americans and Pacific Islanders as a foreign threat. Yet Pacific Islanders have been in North America before the United States was founded and have contributed to society for almost 200 years. Despite their contributions, the previous administration stoked anti-Asian sentiment in addressing the COVID-19 pandemic and we have witnessed a spike in horrific anti-Asian hate crimes. Some members of the Muslim community expressed solidarity with the Asian American community during this crisis, yet it is important to note that there is a significant overlap in our communities. We are thrilled to host two leading Asian American Muslims, Alex Fox and Emad Rahim. They are leading the way in building diverse and equitable futures. 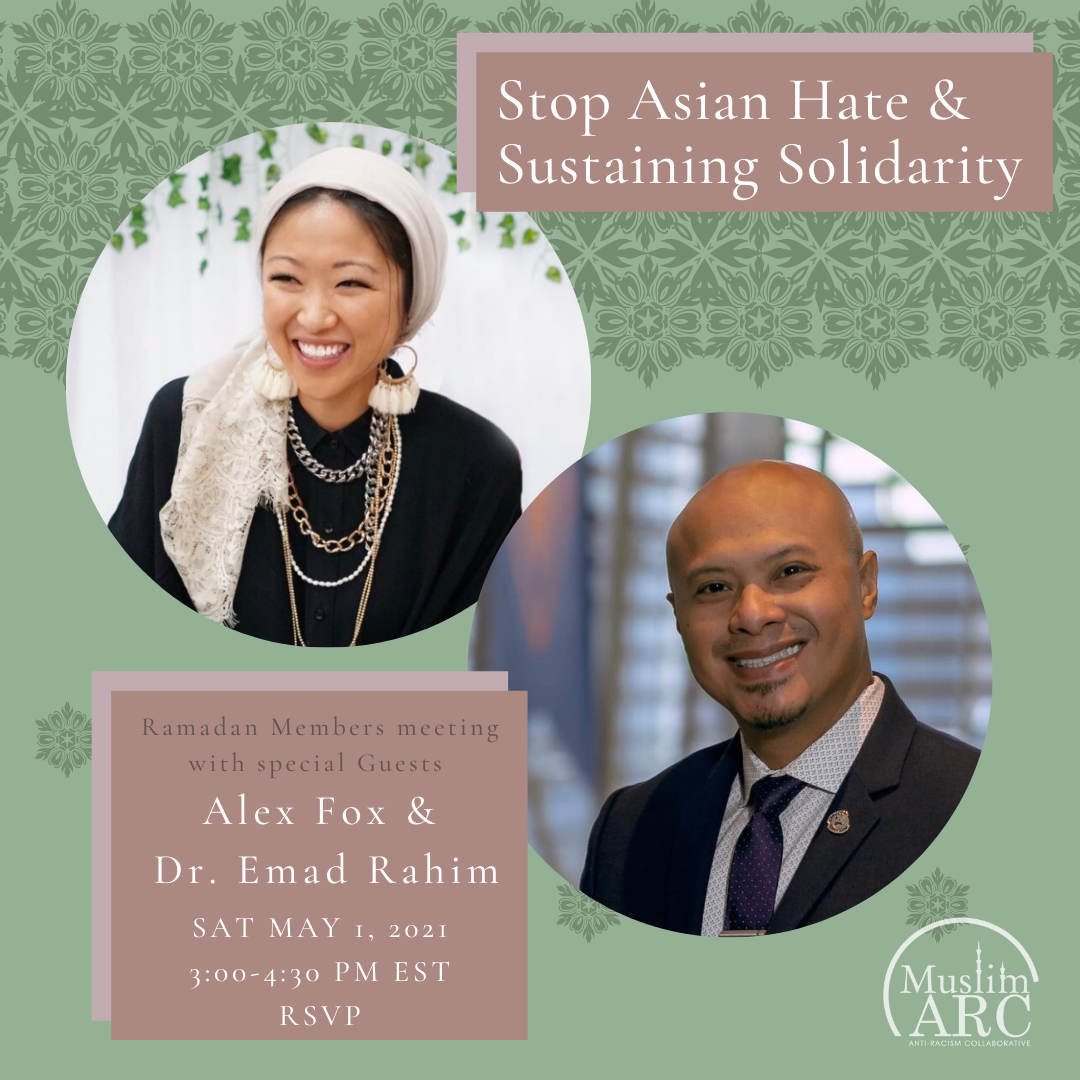 About our guest speakers:

Alex Fox is a product leader, software engineer, and writer committed to building inclusive tech and teams. Alex is exploring ways to better engage, support, and foster community through platforms like Clubhouse, a new audio-only app. She is passionate about racial equity and Oakland. Alex is the founder of Origin of Mind, a lifestyle brand and e-commerce platform designed to raise awareness around and channel support for critical social issues. Their latest product, Marketplace, amplifies independent creators of color, by helping bring their businesses online. Alex is the founder of Muslims & Friends, a group of over +76k members that brings individuals from around the world together to share knowledge, community, and learn from one another. The group hosts conversations around faith, identity, and justice in partnership with Muslim scholars and leaders

Dr. Emad Rahim is an award-winning author, educator, entrepreneur, Fulbright Recipient, and TEDx Speaker. A genocide survivor and Cambodian refugee, his story was turned into the short documentary “Against the Odds,” a 2016 Bronze Award Winner at the F.A.M.E.'US International Film Festival and adapted into a Syracuse Stage theater production titled ‘Tales from the Salt City,’ which is an extension of the acclaimed Undesirable Elements series written by celebrated playwright and Presidential National Medals of Arts Award recipient, Ping Chong. He has been featured in the Huffington Post, Forbes Magazine, IntelligentHQ, World Class Magazine, The Post Standard, VICE, Rutgers’ The Humanist and CEO Magazine, and interviewed on the BBC, NPR, StoryCorps, PBS, and multiple podcast shows.  He authored Resilience: From Killing Fields to Boardroom and co-authored The Inclusive Leader: An Applied Approach to Diversity, Change, and Management and Foundations of Social Responsibility and Its Application to Change.Dr. Rahim has earned advanced post-doctoral credentials from Harvard University, Tulane University, and the University of Maryland/UC. He has a Doctorate of Management and two graduate degrees in business from Colorado Tech, and completed his undergraduate education at SUNY Empire State College. He was awarded an honorary Ph.D. from The Chicago School of Professional Psychology and given an honorary Associate Degree from SUNY Onondaga Community College (OCC). He was the recipient of the prestigious Outstanding Alumni Award issued by the American Association of Community Colleges (only 5 selected across the country), and was honored with the John H. Mulroy Founder's Award by OCC’s Board of Trustees, and received the 2016 Award of Distinction from Southwest University. He was recognized by the United Nations Foundation as an Empact100 Honoree, given a Congressional Award for Civic Engagement won the Entrepreneur Teaching Excellence Award from Oklahoma State University, Teaching Innovation Award from Bellevue University, Community Impact Award by SUNY Empire State College, 40 Under FORTY  Business Leader by Whitman School of Management and CNY Business Journal, and Certified Manager of the Year by the Institute of Certified Professional Managers of James Madison University. Dr. Rahim currently serves as the Kotouc Family Endowed Chair and Associate Professor at Bellevue University, and Training Consultant at Inclusive 360 LLC.  He was the former University Dean at Colorado Tech and Director of Venture Connect at Morrisville State College, where he was selected as an e-Professor by the Kaufmann Foundation and Syracuse University. He has also been invited as a Visiting Scholar at Rutgers University and Lebanon Valley College and appointed as the Riata Center’s Distinguished Entrepreneur-in-Residence at Spears School of Business and Whitman School of Management. Web: www.EmadRahim.com | Twitter @DrEmadRahim | Instagram @dremadrahim

This is a special members event open to the public.

RSVP and get your link!

Facebook Twitter
Please check your e-mail for a link to activate your account.